Since 1985, Fantasy Amusement Company, Inc. of Prospect Heights, Illinois has provided quality, clean, safe “Family Fun For Everyone”.  Fantasy Amusement Co., Inc.  services the greater Chicagoland area, Central Illinois, Northern Illinois and Northwest Indiana.  We have become one of, if not the best carnival provider in the Midwest.

Bill and Mary Johnson first started out with 8 rides, some games and a popcorn wagon.  Now Fantasy Amusement Company fields over 40 rides, games and concessions.  The season first started in May, ending in September. Now the season runs from April through Halloween in the Chicagoland area, Central Illinois, and Northwest Indiana.  Several of the dates we play are original; going back to the first year in business.  We have become the best carnival in the Midwest and greater Chicagoland area.

Our family is very involved in the day to day operations of the business. Our oldest daughter Katie manages a game and assists in the office, along with owning a game and a ride. Katie is also a Full time teacher.  Our son in law Ivan is one of our valued Team Leaders. Our middle daughter Kelly runs our funnel cake concession, along with her husband Vincent who is another of our valued Team Leaders.  Kelly owns the slush stand, and is also a Full Time Teacher.   Our youngest daughter Alyce helps in our popcorn wagon and with game breaks during the busy fair season. Our nephew Bob has worked for us for over 30 years and is a partner in a game.  Our concession manager Mike and now general manager has been with us for  over30 years along with his wife Laurie who helps run the show office during the season.  Team Leader Rick has been with us for over 25 years.      Most of are employees have been with us for over 15 years.   As you can see Safe, Clean Family fun and consistent personnel year after year help to make Fantasy Amusement Company the best choice.   Most of our committee members tell us how nice it is to see the same faces year after year and many know our staff individually by name.

Our show has grown over the years.  Our motto and tagline “Safe Clean Family Fun For Everyone!”  is our commitment to our patrons.   We strive to provide the cleanest, safest and most affordable family entertainment value available today.  The year 2018 marks our 33rd year in business and we will continue to strive to be the best and the most innovative family oriented amusement provider in today’s market. 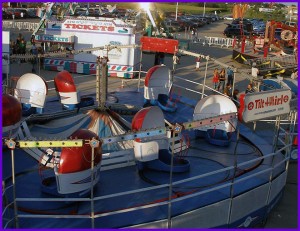 Bill Johnson started in the Amusement Business when he was 11 years old.  The carnival came to town (Niles, Illinois) and a man by the name of Bill Knight asked him if he would help him pick up balls in the Milk Bottle Game.  Bill did this during the shows run, and then for every year after until age 14.   Mr. Knight asked Bill’s Mom if he could work the summer for him–he would be picked up, fed and dropped back home every day.   Mrs. Johnson was a widow; Mr. Johnson died when Bill was only 18 months old.   All of her neighbors warned her to keep her son away from the carnival, but she felt that Bill was doing quite well with Mr. Knight.   By the time Bill was 18, he was running a unit for Mr. Knight.   At age 24 he bought his first ride (The Swinger) and still managed games.  At Age 25 he became Ride Supervisor for Loop Amusements. The next year he owned 2 rides and managed 7 games up until starting Fantasy Amusement Company in 1985.

In 1994,  Bill was elected President of the Showmen’s League of America, whose first president was Buffalo Bill Cody.   The Showmen’s League of America has a rich and proud history, starting with Buffalo Bill to the present.   In 2000, Bill was selected to serve on the Board of Directors of the OABA–Outdoor Amusement Business Association.  Bill completed his Chairmanship of the OABA in 2011.   Bill continues to be active in the OABA participating in the board meetings and assisting on various committees.   The OABA is the only organization totally devoted the Outdoor Amusement Business; all aspects of working in and with, and in many ways has helped our business and others like us grow successfully.

We still have events that we have working since our first year in business, and employees that have been with us since the beginning too. For over 33 years, Fantasy Amusement Company has worked to provide Fairs, Festivals, Civic Groups, Special Events, Shopping centers and Churches with means for a successful fund-raising event.

Fantasy Amusement Company, Inc.  is perfect for just about any size event.  Our modern Amusement Park Style rides and Theme-park style games and concessions can be tailored to your needs. We are a family-style show featuring family-style entertainment; “Safe, Clean Family Fun For Everyone!”